Hello Friends! I’m back! Like I think, a lot of readers, I went through a crazy long reading slump. Really, it was about two weeks, but it felt like forever for me. It put such a damper on things but I am back reading, closing up loose ends and ready to binge write some reviews. A book I am excited to chat about today is Paris Is Always A Good Idea by Jenn McKinlay.

Paris Is Always A Good Idea 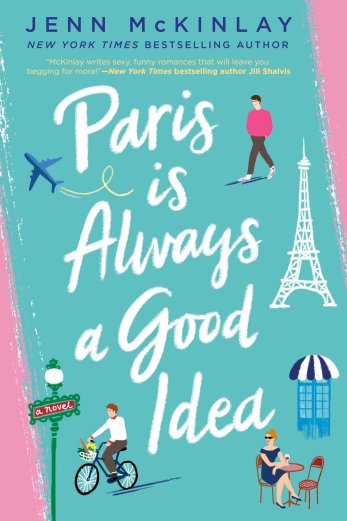 It’s been seven years since Chelsea Martin embarked on her yearlong post-college European adventure. Since then, she’s lost her mother to cancer and watched her sister marry twice, while Chelsea’s thrown herself into work, becoming one of the most talented fundraisers for the American Cancer Coalition, and with the exception of one annoyingly competent coworker, Jason Knightley, her status as most talented fundraiser is unquestioned.

When her introverted mathematician father announces he’s getting remarried, Chelsea is forced to acknowledge that her life stopped after her mother died, and that the last time she can remember being happy, in love, or enjoying her life was on her gap year. Inspired to retrace her steps–to find Colin in Ireland, Jean Claude in France, and Marcelino in Italy–Chelsea hopes that one of these three men who stole her heart so many years ago, can help her find it again.

From the start of her journey nothing goes as planned, but as Chelsea reconnects with her old self, she also finds love in the very last place she expected.

This was my first experience of being familiar with an author but due to their writing in another genre. I was super excited when I saw Paris Is Always A Good Idea was authored by Jenn McKinlay because I am a total fan of her cozy mysteries.

I tend to forget to mention trigger warnings: death of a parent; death of a sibling; cancer; brief mention of self harm

I really liked Chelsea though it does take some time to warm up to her a little, but before I knew it, I was completely invested in her and her story. Now, more than ever when everyone is in self-isolation, Chelsea’s story is the kind of story we need. I will never get tired of self-discovery and I think regardless of age or where you are in life, Chelsea’s story is a reminder that we are constantly discovering and becoming who we are meant to be. I love the travel aspect to this book. We tag along with Chelsea as she travels to a small town in Ireland, the big city of Paris in France and a dreamy vineyard in Italy to reconnect with the three men she fell in love with seven years ago before the death of her mother. There is also a rivalry with a handsome co-worker of hers. All tropes I am a huge fan of! The different locations were so fun and the will they-won’t they had me on the edge of my seat in regards to will she link up with these old flames?

I thought the familial aspect was done really well. Chelsea’s father comes to her one day with the news that he is getting remarried to a woman he only met two weeks ago and Chelsea is, understandably upset.

2020 has been ridiculously stressful, a complete dumpster fire. Paris Is Always A Good Idea is a well written, amazingly structured story of self-discovery, finding love along the way and honoring those we’ve loved and lost while moving on with life with them always in our hearts. Jenn McKinlay did a phenomenal job at capturing Chelsea’s loss and grief and determination to find herself again. I am so excited for more than just her cozy mysteries now, she can do no wrong at this point!