#2 in the Men At Work series

Clover Greene would sooner crawl into her oven than host family for Thanksgiving dinner. Yet another annual ritual of too much food, served with a side of criticism over “Clover’s Bad Life Choices.” This year, she needs to distract them all—with a handsome fake boyfriend. And she has the perfect guy in mind.

Contractor Erick Fields is the poster boy for sexy single dads, and Clover has been secretly crushing on him for ages. She certainly wasn’t expecting Erick to agree to her insane charade…or to add lots of hot, wicked sex to the deal. If they can pull it off, the worst Thanksgiving ever might give them something to be really thankful for!

Why Read This Book:

Her Naughty Holiday was a funny as hell, super sexy, fake dating holiday romance. This is my first Tiffany Reisz romance and will definitely not be my last. I really enjoyed that the heroine and the hero were a tad bit older. Erick is actually the Dad of Ruthie, who works for Clover, our heroine. Ruthie is a total force herself to be reckoned with. I adored her. She is this total 17 year old feminist and I couldn’t get enough of her scenes.

The entire beginning and middle half of this book is build up for Thanksgiving day where Clover and Erick prepare for Thanksgiving dinner with Clover’s terrible, so terrible, family. Clover and Erick agree to ‘fake date,’ so that there is a possibility that Clover’s family will back off and give her a break about being single. These people are hilariously terrible people. They give Clover a hard time about being a college drop out, despite the fact that she is still a successful business woman. They want her to settle down and have kids, but not with Erick who is the father of a 17 year old daughter because “step kids are second best.”

I was expecting a very passive scene that I see in a lot of books where the heroine is “the bigger person,” and doesn’t say anything but oh boy, was I wrong and a total Stan for it. This book had one of the best stick up for yourself scenes I’ve read in a book and it didn’t stop there. After Clover is done with everyone’s crap, she kicks THEM ALL OUT, even Erick. Her family is stunned and stubborn and doesn’t seem to get the point, so Erick has to help them understand why Clover is so pissed. 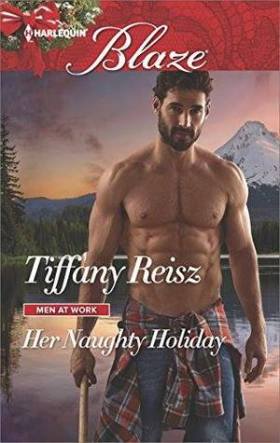 I loved his scene alone with Clover’s family just as much, if not more than I did hers.  It was great, and in true romance fashion, she heard it all while standing in the background on the stairs unnoticed.

You have to add this holiday gem to your tbr. If you can snag a copy of the audiobook, I can’t recommend it enough. Erick is very sarcastic and uses a lot of jokes, and it just translates so well via audio.