You know the feeling when you’ve read the first two books in the trilogy, and you’re Positive that there’s no way that the this book is going to live up to the first two? Like, there’s no way all three books can be good? I was very nervous as I began reading Some Sort of Love by Melanie Harlow. The first two books in this trilogy were basically awesome and that made me weary about the third. Melanie Harlow yet again, has me gracefully taking several seats because not only did I love Some Sort of Love, but it’s my favorite out of all three reads. 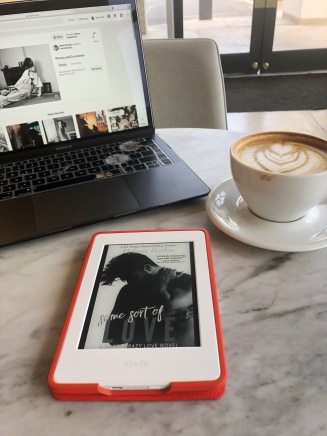 From the outside looking in, I had it all—a career I loved, a supportive family, the Nixon metabolism but not the Nixon ears, and a salary that supported my lavish taste in designer shoes, fine wine, and lacy lingerie … but I had no one to share it with.
Until the day I ran into him—my one night stand from college with the crooked smile, let’s-get-out-of-here eyes, and dirty, dirty mouth.
Cute and cocky then, today Levi Brooks is six feet four inches of hot bearded fantasy. A sexy single dad with broad shoulders, strong hands, and a fantastically big … heart. (I mean, it’s massive. And generous. And it pumps so hard … um. Sorry. Lost my place.)
Being a good father means everything to him, but he’s keeping me at a distance because he thinks I deserve someone better — a man who can give me more time, more attention, more of himself. He doesn’t believe he could ever be enough.
But he’s wrong.
He’s everything

Some Sort of Love felt like riding the biggest ride at the state fair, in the front seat with a blind fold on! Jillian and Levi had a one night standish/in the closet/in college situation once upon a time and haven’t seen each other since. Until years later and they find themselves as guests at the same wedding.

The romance picks up very quickly. Things get hot and heavy pretty quickly. These two are perfect for each other, and I realized that very quickly. What stirred up my emotions in this book though was Levi. Levi is a single father taking care of his son Scottie who is autistic. As the mother of a special needs child, I felt his frustrations and hesitations in my core. I felt Harlow did a wonderful job writing Levi and Scottie. As the reader you really get to see Levi struggling to find the balance between being attentive with Scottie who he has always put first because he needs him, and falling in love with Jillian.

I enjoyed seeing things from Jillian’s perspective. I was very frustrated on her behalf because Levi at a certain point began treating her like a “side dish,” as her sisters put it. He was so nervous about introducing Jillian to Scottie that all she was getting from him was there Friday night rendezvous.

“I didn’t need everything but I needed more.”

This romance really explored the concept of trusting someone. Levi had to let his guard down and trust Jillian. Thanks to Scottie’s Mom, he has his reasons to be hesitant the way he is and I enjoyed seeing the many different backlashes from mistrust after being hurt.

With this following three sisters and their romances, I was happy to finally get older sister Jillian’s romance. I admire the sisterhood between the three characters. It was refreshing to read. In a world where the more strain the relationship the better, it is so nice to read of a sisterly bond with no drama.  I also really liked Levi’s sister and how supportive she is.  Levi’s Mom too. She and Levi had been a bit strained due to his outlook on how she periodically stepped her boundaries when it comes to Scottie. My respect for her grew though.

I am sad to see this trilogy come to a close, but it makes me excited to continue on with what I can find by Melanie Harlow. I loved this book. I loved the families. I loved the romance. Its definitely worth the read if you’re looking for a romance you can easily get lost in and finish in a day or two.